Topping it off in Style


Philip Treacy is one the most well known Millinery Designers and is responsible for a bevy of artistic hats created for the Royal Ascot and the Royal Family.

British Women wear hats often and they do know the fine art of 'topping it off in style' (well, for the most part). But mixed in with the elegance there are the outlandish Lady Gaga version of hat styles, the over indulged chapeau's that turn heads (likely for the wrong reasons). Treacy is notorious for his spectacular plumed hats and for ensuring that the Royal Family is dressed in style.

Princess Diana was a style icon in her own right, and she wore hats with elegance and grace. Kate Middleton has been spotted wearing everything from a cowboy hat to a regal plumed pillbox hat, and she suits it all.

The upcoming nuptials of Prince William and Catherine Middleton will bring out Britain's 'Finery'; men in morning coats, ladies in elegant gowns or dress/jacket ensembles topped with a wonderful new hat. When I look at the images of Queen Elizabeth over the many years, I think that the volume of hats she has worn must be an overwhelming amount.

Not everyone can wear a hat; some people just do not have the right head shape, or face dimensions to do a chapeau justice. Camilla Parker is one person who must be cautious when selecting hats. She has repeated the same Feathered Halo Crown on several occasions; maybe it's time to retire the look (along with the dated 'flip hairstyle').

There will be a bevy of new styles with elaborate plumes, bows, netting and brims in a variety of colours making their debut at the Royal Wedding. If I were attending the wedding I too would don a new hat, maybe a little something like this ............drinks included. 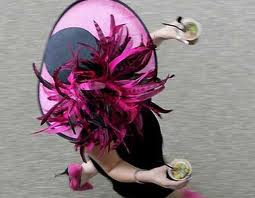 Posted by Katherine at 8:57 PM