The Duke and Duchess of Cambridge :: William and Catherine

"We were supposed to have just a small family affair"
Prince William to the Bride and her Father as they meet at altar. 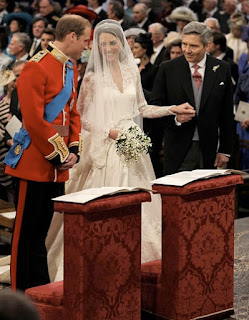 Prince William's warm sense of humour and sincerity was evident this morning at the altar when he leaned over to his Bride and her Father and offered his explanation for the crowd.

In a perfectly pitched ceremony at Westminster Abbey the new young Royals exchanged marriage vows setting a new tone on tradition. The family, friends and celebrities arrived; the beauty of the Abbey was enhanced even further with the regal elegance of a deep red carpet rolled the length of the church, the aisles flanked by enormous maple and hornbeam tree's. 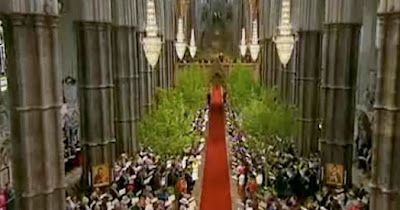 Prince William and Prince Harry arrived in full Military uniform. William appeared remarkably calm and relaxed, while Harry seemed to ring his hands in nervousness prior to the ceremony.
But it was a brief moment at the altar that the brothers exchanged a private moment. It is protocol for the Groom to face the altar and not watch the Bride come down the aisle; but Harry turned and took a peak, smiled and shared a quick comment with his Brother. 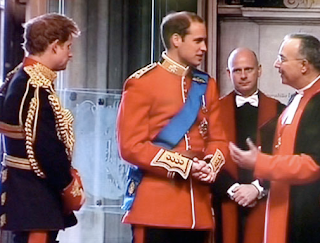 The procession of vehicles continued to arrive; two young groomsmen, four little bridesmaids and the Brides sister Pippa who looked striking in her ivory white gown. 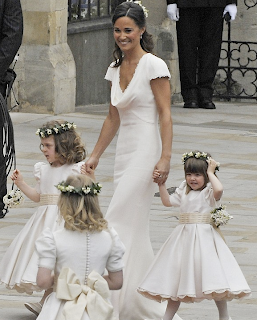 Pippa's gown was elegant and understated enough to not take away from the Bride; yet the gown is elaborate enough to be worn by a bride of non-royal status. This gown, as well as Kate's, will be copied and worn by Bride's around the world. It is timeless and Pippa looked stunning.

And then...... The Bride and her Father arrived. Kate emerged from the car to the sounds of gasps from the crowd and the world watching; and finally the secret dress was revealed. And it did not disappoint.
In a gown designed by Sarah Burton for the house of McQueen, the traditional styled sweetheart lace neckline gown had a reminiscence of both Princess Grace and Princess Margaret's wedding gowns. 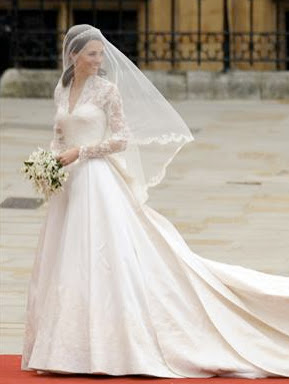 With just the right amount of full ballgown skirting, the elegance of lace covering the bodice and extending as sleeves, and a manageable length of train (10 feet); the gown presented a timeless quality that will be know as one of the most perfect Royal wedding gowns. 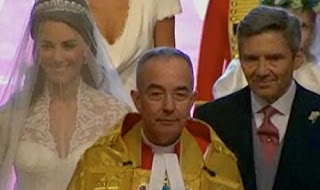 The blusher veil was highlighted with the Cartier Halo tiara. The understated headband of diamonds tiara was originally a gift to Queen Elizabeth on her 18th birthday and has been lent to Kate for her wedding to the Queen's Grandson.


When Prince William did turn and greet his Bride and took her hand from her Father, visibly it could be seen that he said "You look beautiful". It can be generously said that Kate looks beautiful every day, and today she was radiant. 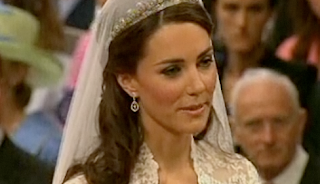 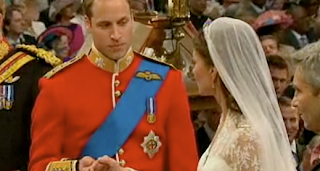 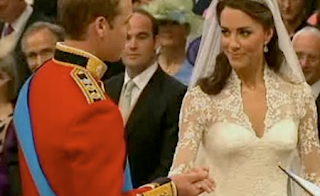 "Marriage should transform, not reform when you marry"

When the Duke and Duchess settled into the carriage for the ceremonial ride back to Buckingham Palace, Kate it is rumoured said to William "are you happy'. They both radiated the look of happiness and love as they glanced at each other between waves to the enormous crowds estimated at 200,000 people along the route. 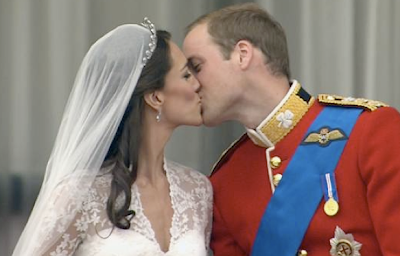 The waiting crowds were treated to not one, but two generous kisses from the Newlyweds; showing the world that this step away from old protocol mixed with the right amount of tradition is the face of the new Royals.


William and Catherine,
the world wishes you a lifetime of love, happiness and good health.