Despite the name of my blog, you {very wise readers} know that life isn't really all that Glamourous. We schlep around in our pj's when given the chance, combat age spots and shop for 'deals' at the local mall rather than splurge on couture. 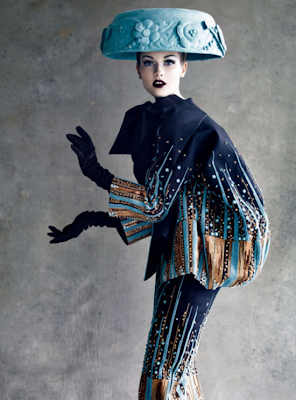 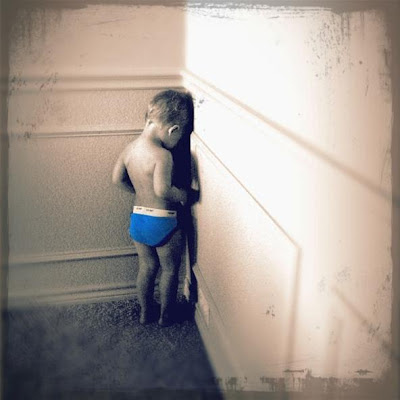 Excuse me while I take a break from writing .......... at least until the full moon lifts. Feeling deep blue.

Have a GLAMOUROUS Weekend 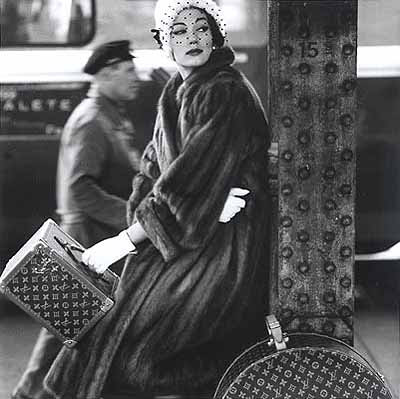 Wishing you a weekend filled with fun and Glamour.

Celebrating and Giving Thanks

As a Canadian we celebrated our Thanksgiving on the second Monday of October. The weather was mild enough to consider barbecuing the turkey.
So what do Canadians do in November when our neighbours in the United States celebrate Thanksgiving?
For some of our businesses that connect heavily with the United States we work around the holiday closures - a trade off from our October holiday. Some brave Canadian shoppers head over the boarder to upper U.S. states and take in the holiday sales. I prefer to avoid the crazy shopping days, but have always enjoy my own little tradition for the U.S. Thanksgiving. 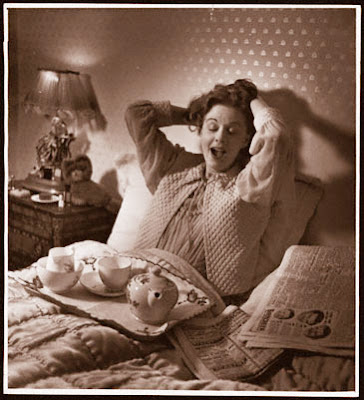 I have always booked a 'me' day from work and stayed home to enjoy the Macy's Thanksgiving Day Parade. Just me..... in my pajama's ....... with coffee....... and usually something decadent like cinnamon buns for breakfast - YUM {so now my secret is out}.  Later in the day I take time to get to work on my Christmas shopping list.
This year I plan to introduce my Granddaughter to the tradition - she loves parades, is crazy about balloons and has inherited our family sweet tooth. Maybe I need more cinnamon buns.


The Macy's Thanksgiving Parade hosts 3 million viewers along the route and 50 million viewers 'at home'...... and then there are the Canadians like me who snuggle down to enjoy the celebration.

I love the floats and character balloons, over the years they have reflected a variety of current cartoon celebrities. There have been some 'incidences' with balloons over time, last year the Kool Aid Man tipped over - proof that the red fruity liquid really is potent.
The Thanksgiving celebration is guided through New York city by an army of 8 thousand volunteers. This year marks the 86th Annual parade, although the first parade year was 1924. The parade took a hiatus from 1942 - 1944 during World War II.

The Rockettes have performed their precision dance routine at the Macy's Thanksgiving Parade since 1957. Their eye high kick performance is one of my favourites and I am always in awe that the dancers never miss a beat, even while dancing on the street.

The crowds line the parade routes stretching their necks to look up to the giant balloons and enormous floats, they listen to the music of the marching bands and the song and dance routines from the Broadway shows. But the star of the show by far is the man in the big red suit. And as with all Christmas parades, he arrives last to the cheers of the children who are promising to be 'nice'.

To my blog friends in the United States, I wish you a Happy Thanksgiving. 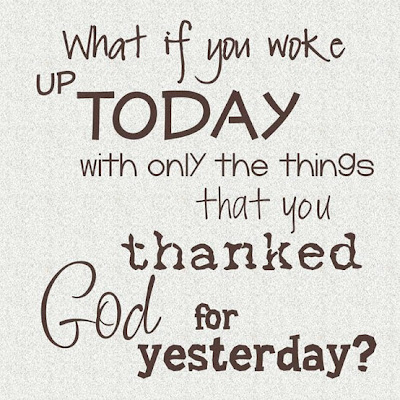 Santa came to town on the weekend and it was a kind reminder that I need to get started on preparing for Christmas. I stopped by Chapters Indigo store last week looking for a book and I quickly got lost in the Christmas gift sections.

I love this time of the year; the displays, the colours, the lights, and oh the sparkles.
This year the owl is making his wise mark in the retail design landscape. This little cutie above can be found in the baby gift section. The hat is actually a newborn hat, but I couldn't see myself buying this wise young bird without the knit chapeau.

I'm not sure if it was the mood I was in or the early and very full displays of great gift idea's, but I left Chapters inspired about Christmas shopping. My apologies to the Chapters team - the images are taken with my iPhone and random re-arranging of items was my doing.

Hope that this inspires some idea's to make your shopping easier, here are a few of my finds .....


Knit pillows make snuggling up on a cold night so much better. Silver penguin cocktail shaker adds fun at your home bar. Candles ..... so many great colours and fragrances. Silver flask engraved 'Candy is Dandy. Liquor is quicker'.


I'm the kind of shopper who likes to see and touch the product before I buy it, but this season I plan to do a bit more shopping online. I like that Chapters has great books {always a great gift} and gift items for everyone.

Happy Shopping!
Posted by Katherine at 9:33 AM 7 comments:

It was 1828 when Paris began lighting the Champs-Elysees with gas lamps. It was the first city in Europe to do so, and gained the name 'La Ville Lumiere' ...... The City of Light.

Paris, she is a beauty every day and at any hour, but the flicker of the lights at night will take your breath away.

Four years ago Richard took me to Paris and we explored the elegance and beauty. I especially loved wandering in the evening with the lights glowing and could have easily walked until dawn just to drink it all in.

With a glass of wine in hand, we sat at an outdoor cafe and watched
the lights dance up the legs of the Eiffel Tower. 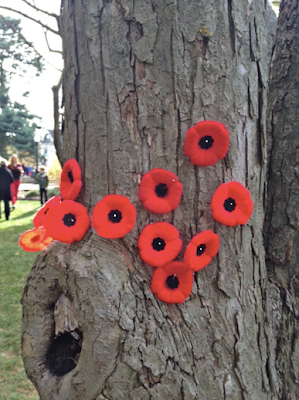 They fought for the freedom of our country, and they served our nation proudly.

We stood in the park this morning at Saint George's Square in Oakville to listen to the tributes paid to Canadian war veterans. It was already sunny, warm and glowing out, but when we turned the corner to walk across the park lawn and saw the generous turnout of residents, it felt even brighter.

We stood near a tree full of golden autumn leaves and the sun was peeking through on the crowd. I honestly felt like a kid back in grade school with the lessons about the meaning of Remembrance Day running through my mind. I couldn't help but remind myself that the reason we are all standing here in peace and safety is because of the sacrifices of so many men and women who serve Canada. 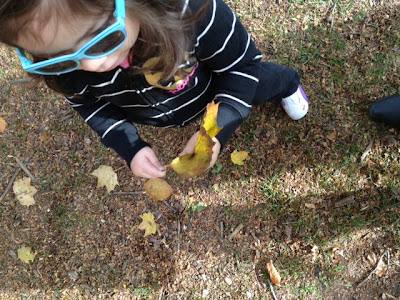 Richard and I watched our Granddaughter play on the lawn picking up the leaves and twigs. She's too young to understand the meaning behind it all yet, but even at two-and-half she was excited with the parade of flags, the bands and the man with all the stickers on his jacket. So she learned a new word today - Medals. 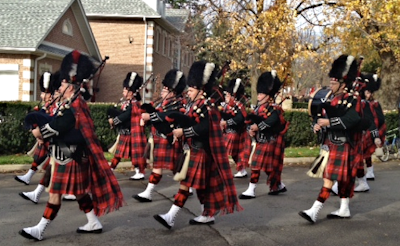 Three planes flew over the square as a tribute to soldiers who lost their lives serving our country and to the soldiers who thankfully returned home after the valiant battles. 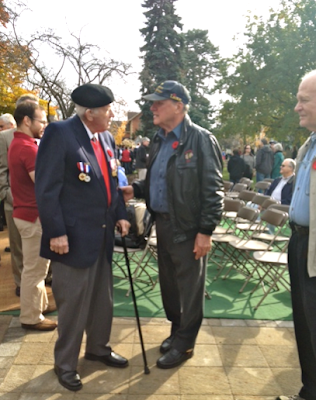 Today we saluted the men and women who served in the military forces of Canada, and think of those who are currently serving. 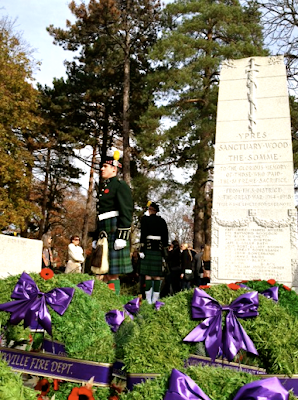 Thank you for your bravery. 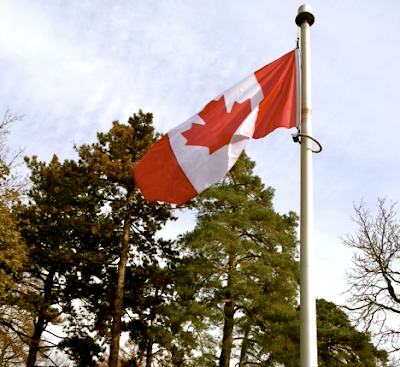 Posted by Katherine at 8:33 PM No comments:

The Rustle of Taffeta

"There is no sound more feminine than a woman in a taffeta dress".
Oscar de la Renta

The charming forever youthful and handsome couture designer knows what a woman needs to look GLAMOUROUS and FEEL outstanding.
No one has dressed women with such a high regard to our feminine charms than Oscar de la Renta.

Here is a selection of some of my favourite taffeta fashions. 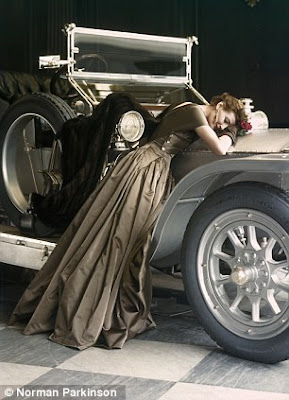 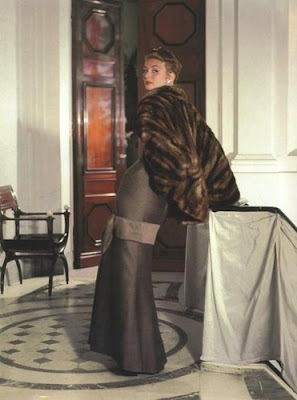 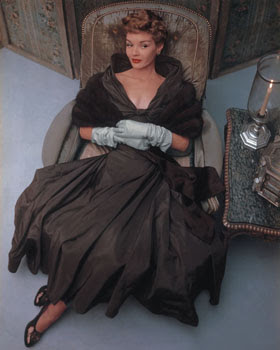 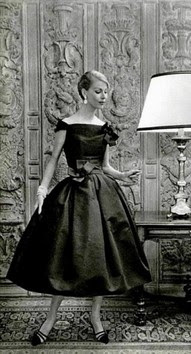 "A woman should be in love with the clothes she is wearing".
Oscar de la Renta