We explored Greece this past October; and in addition to staying on the mainland in Athens we visited three islands. One of the most impressive islands in Greece is Santorini, in particular the village of OIA (pronounced E a ). The island of Santorini is what remains of a giant volcanic eruption; the steep cliffs drop 1,000 feet to the central caldera which is seven miles wide.

The impressive photographs of white houses perched up on the sides of the cliffs in Greece are for the most part pictures of OIA. It is breathtaking on this island and for both of us it was the highlight of our trip. We stayed at the beautiful resort of Andronis Luxury Suites which is a traditional hotel with a sleek clean look snuggled in the cliffs.

We arrived at the hotel, checked in and the staff proceeded to take us to our room. We left the lobby and went back outside to a set of stairs. I had instant vertigo, I could not believe how much of a drop it was to the waters edge..... a very steep and bumpy drop. We were shown to our room, which was built in the side of the cliff. It was cave-like, simple and yet sophisticated. The views were breathtakingly beautiful. THIS was going to be a memorable experience. 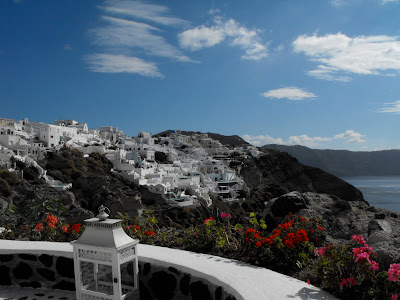 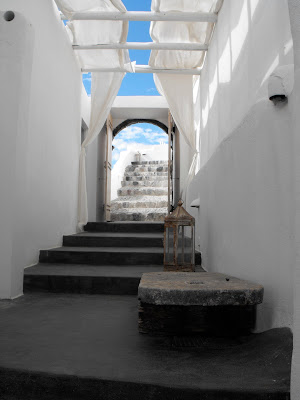 The hotel has 22 suites all nuzzled in the cliffs. The stairs twist and turn around the rooms to different levels of the cliff side, and then finally rest at the lower level were the infinity pool hangs about 500 feet above the sea's edge.
The rooms are unique and cave like, offering a calm and quiet setting for sleep. Many of the suites come with their own ocean view veranda and private pool. We had a small private gated patio just across from the steps to our room; complete with a lounge area, hammock and small whirlpool. It was a wonderful place to have breakfast in the morning, relax in the sun during the day and float in the pool beneath the stars at night.

One of the most noted points of the hotel is the dining area on the cliff. Visitors to the area frequently stop on the streets at the top of the cliff and look down in amazement to the beautiful dining area.
The food was incredible and the chef offered many different selections to local delicacies all with a new twist. Oliver, among his many talents, is the Sommelier at the resort and he guided us through the wines of Santorini. More about the day trips of Santorini and the winery to follow.

Richard and I enjoyed a wine tasting session one evening at sunset. Despite the idea that we were sitting on a cliff drinking a fair amount of wine (and I was wearing 4 inch heels while on the cliff), it was romantic to see the glow of the sun settle over the Aegean sea. 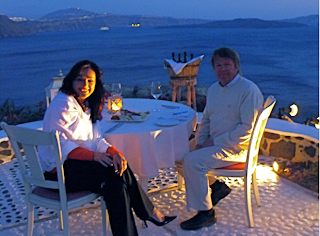 The hotel has an incredibly simple decor flair, with large benches of driftwood swathed in gauze fabric and the use of the natural stones from the area it provides a calm elegance to every vignette on the property.


The main pool was cool at times - ok, it was cold. But it was October and the temperatures dipped at night. We enjoyed the sun and when it became too hot the pool seemed like a great relief. The whirlpool on our terrace was just the right temperature to float around in.
On our last day at the resort I was enjoying the whirlpool and relaxing in the hammock, when I noticed some interesting activity on the cliff dining area. They were preparing for a wedding.

What girl doesn't like to watch a wedding. I had a very different vantage point than the photographer who was only feet away from the couple, and I decided to take some pictures. It was a wonderful setting to marry in and the couple had the attention of many of the guests from the hotel. We all cheered and raised a glass in celebration when they exchanged their vows. 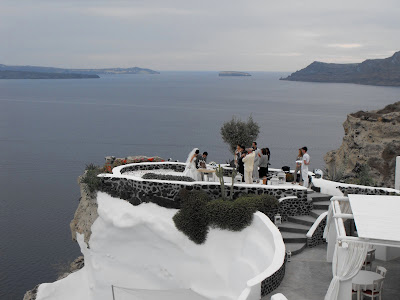 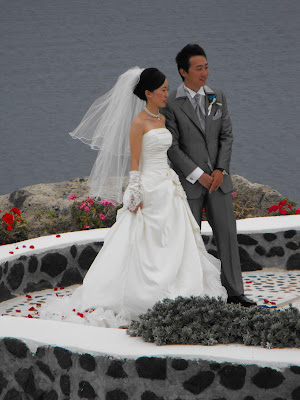 I requested the email address of the couple and have since sent them many pictures of their wedding taken from the cliff top. We've exchanged several emails and shared basic details of our lives.  As couples, we were both a half a world away from home; the newlyweds from Japan, Richard and I from Canada...... both there because of Love.

I know that on the beautiful cliff's edge at OIA there have been many couples who celebrated their love and heard a song of romance whisper in the air.