There has been an abundance of public opinion about Kate Middleton wearing the engagement ring that belonged to Princess Diana. Some view this as a superstition and feel because Diana and Charles marriage was a failure, that it is a bad omen. Others have voiced the opinion that it is a wonderful tribute to William and his love for his Mother. What matters is that Kate and William have chosen to share the ring in their relationship.


It is not uncommon that Royal brides inherit jewels that have a history. Many 'common' brides wear engagement rings that belonged to their Mother or future Mother-in-law. Kate's 18 carat sapphire ring is surrounded by 14 diamonds and was bought for $65,000 in 1980 (approximate value is $95,000 today).
At the time it raised a stir among the royals that Diana was not receiving a ring designed specifically for her; as the ring was an already established design with Garrard Jewellers. But Diana's decision was possibly an early indication that she would bring a new look and vibe to the Royal Family.


It is rumoured that Kate will wear the 'Fringe Tiara' with her wedding gown and veil. My choice for Kate would be the Girls of Great Britain Tiara (pictured below), which was originally given to Queen Mary in 1893. This Tiara has a lighter open look with the diamonds sprinkled throughout.


Rubies, Emeralds, Pearls and Diamonds are among the precious jewels in the Royal's Jewelry collections. Rings, pins, chokers, tiara's, and necklaces have all been gifted to the new young royals. Princess Diana was the most creative in adapting the jewels to a new look and earned much attention (and scrutiny) when she wore the Cambridge Emerald Choker as a headband.

Princess Diana always had a fresh approach to her style; she could wear a Tiara, diamond necklace and heavy drop earrings, and still manage to have it look youthful. In 1988 when Diana was trying out a longer hairstyle, she wore her hair twisted up and pinned with a diamond star brooch adorning her new look. 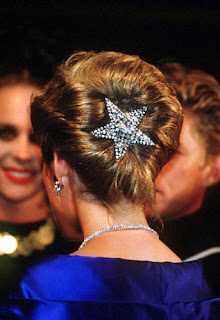 Kate's choice of wedding gown may offer designers inspiration for their upcoming collections; and brides-to-be around the world may want to wear a copy of the gown when it is finally revealed. Jewellers are expecting a surge once again for sapphire and diamond rings, just as they did in 1980 when Diana and Charles were engaged. But much has changed in thirty years and new brides are not embracing coloured stones for their choice in lifetime commitment rings..... well, unless it is a coveted Yellow Canary Diamond.  For the average bride, the classic lines and elegance of Tiffany's is still one of the most popular choices.

When Kate Middleton passes the threshold and becomes Princess Catherine, she will no doubt have many occasions to wear the beautiful Royal Jewels and Tiara's.
I think she will bring a new and fresh approach to the collection of Royal Jewels, just as William's Mother did.