A walk around our town

There are some wonderful historical houses in the downtown district of our town, many of them are like pictures framed by the intricate fretwork trim. I noticed a painter last week paying particular attention to the trim on a house and I decided it was time to take a walk around town with my camera. 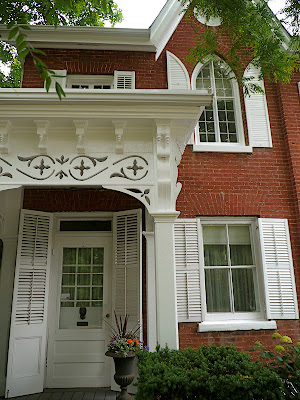 According to the historical society the house has two names. The Robert Farley house or the Charles Lusk house {circa 1858}. The house changed hands three times before Robert Farley bought it in 1857 for 50 pounds. Records show that  'the house was sold again in 1864 for 300 pounds as an investment, but the owner George Rutherford of Hamilton, took a bath and sold it in 1867 for 125 pounds'.
It seems the real estate oddities regarding pricing in Oakville began way back then.

And Doctor Charles Lusk? He purchased the house next and was instrumental in building St. John's United Church in town. 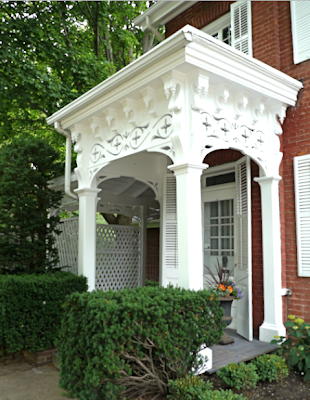 It is a combination of the detailed fretwork and immaculate condition of the house that catches my eye every time I pass by. 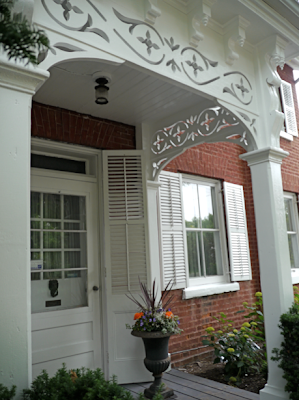 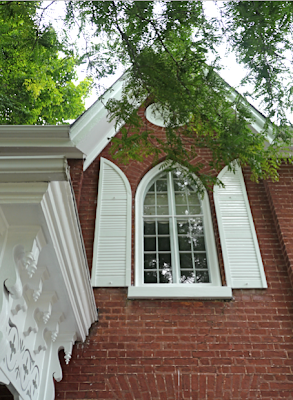 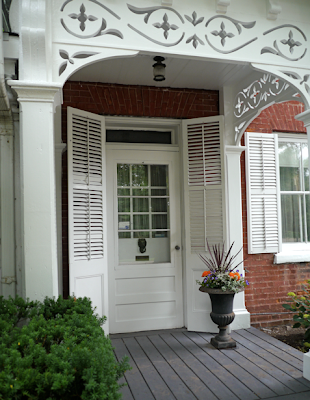 Right next door is another historical house that is known as the Moses McCraney House {circa 1850}. This house has seen some recent transformations, not an easy task when dealing with the Historical Society and the town. We have all watched as an addition was put on the house to compliment the style of the house.

This is the original house with an addition on the front from many years ago. The front porch was restored in approximately 2006 and the main entrance to the house was put back to it's original place.


This is the house today. The current home owners should be applauded. It is difficult to maintain a historical home, but to restore it and add on to the building within the stringent guidelines it is a painful process. 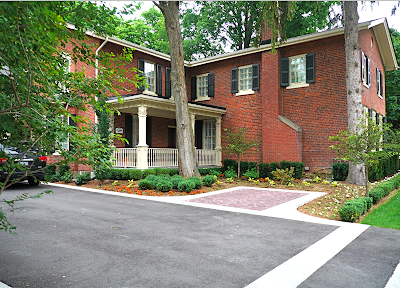 You can almost picture the McCraney's back in the late 1800's living in the house, walking up the front porch and helping to develop Oakville.
Moses McCraney was the eldest of ten children born to William Payne McCraney and Rebecca Teeter. Moses inherited the family farm in 1853 and provided farms for his brothers and mother. Rebecca's farm is now a part of Appleby College {another stunning historical property in Oakville}.
In addition to the farm, Moses owned a general store and made buying trips into the U.S. with Timothy Eaton. Corsets were the fashion rage and Moses bought three of them giving one to his wife Sarah, who had a 21 inch waist {assuming he sold the other two in his general store}.


The details are carried throughout the house consistently - in the brickwork, the trim, the plantings, the lighting. That is what makes an addition, especially to a historical home, a seamless transformation.
There was a {tasteful} sign on the front lawn acknowledging the contractor who produced the addition. I didn't get the information before it was removed, but if anyone does know, please email me and I will gladly add the contact information.
As I watched the progress of the home addition from the street, I was impressed by the process and results. 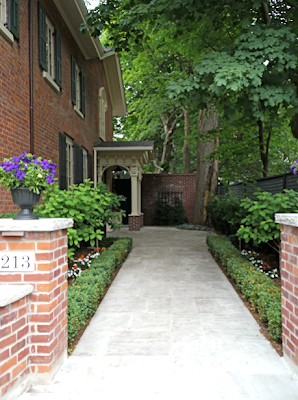 Two beautiful houses that literally make me smile when I walk past them.

Posted by Katherine at 1:02 AM