It's the morning after that coveted golden man 'Oscar' was placed in the hands of the top talent in the film industry. 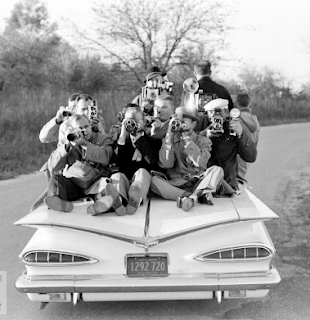 Despite the overwhelming love affair with the 'red carpet', the Academy Awards are a recognition of the hard work and talent of everyone involved in films. If you haven't seen the nominated films yet I urge you to treat yourself to the experience of watching these golden films in the best viewing room - a theater .

It was back in May of 1929 that the very first Academy Awards were presented at the Blossom Room at the Hollywood Roosevelt Hotel. The picture above of the Pantages in 1959 shows that a simple line-up of valet drivers was all that was required at the red carpet. How things have changed.

I have not viewed all of the films yet so maybe it's a bit unfair to remark, and albeit that they are very different movies, I could watch both 'The Help' and 'Warhorse' many times over. The Artist, Hugo, and The Iron Lady are on my list of must watch movies on the big screen.

I was excited that Octavia Spencer won Actress in a Supporting Role in her portrayal of the character Minny Jackson for the film 'The Help'. Ms. Spencer is sure to shine on screen again in many dramatic roles.

Canadian legendary actor Christopher Plummer won for Actor in a Supporting Role for 'Beginners'. His speech was one that will become memorable for years to come. Mr. Plummer looked lovingly at the Oscar statue and said; "your only two years older than me darling, where have you been all my life". At 82 years of age, the Toronto born actor is the oldest actor to win an Oscar.

Congratulations to all of the nominees and winners.