I've been working up to putting this post together, it is difficult to write.
We recently had to say goodbye to our family pet and it was one of the hardest things we have had to do.
Our little Yorkie (Yorkshire Terrier) of eighteen years..... yes 18 years, was becoming increasingly less mobile and we had to make a decision as a family on what was best for him.
Sir Toto The Wiz Kid (his official kennel name) who we lovingly called Toto or Tote's, first came home with us when my children were in grade school. The breeder met with us and interviewed our family to ensure that her pup was going home with people who would love and care for the dog. We had the chance to see another litter of pups at the breeders and she explained to my children the length of care needed for a dog. We 'ordered' our puppy requesting a boy if possible. Months later and two days after Christmas we received a call that 'Raisin Kane' (Toto's Mother) had born a healthy litter and there was a 'boy' for Dallas and Monique to take home and love.
Well, if you haven't seen Yorkie pups let me say they are the cutest little dogs. We visited our new pup each Sunday for weeks until he could finally come home with us. Toto weighed almost 2 pounds when he came home and although he was an energetic little guy running around, he needed to be protected. Just jumping down off a step could cause a leg fracture at this young age. I bought a second hand mesh baby playpen to put Toto in when we were out or at night.
One of the early nights when Toto came home he decided that sleeping in the playpen with his dolly (that was bigger than him) was not his idea of fun. While he cried in the playpen I laid in bed thinking that Toto would settle down, and I thought he did. But what had happened was that he climbed the mesh side of the playpen and found his way upstairs to my bedroom. I suddenly heard Toto's little cries and thought 'wow, he's sounds really close'; and there he was right beside my bed.
It is amazing that a little pup only home with us for a few nights managed to find his way up to our rooms. I knew then that the power of instinct and the desire in his little heart to be with us was exactly what my children and I needed.
Toto was a silky blue coat Yorkie and his hair needed to be groomed daily. It also meant that I could put his hair in the traditional Yorkie top-knot ponytail. He wore a red bow in his hair for many years..... oh, the indignity. We decided to eventually cut his hair short into a puppy cut, he looked adorable. Dallas and I eventually took on the grooming of Toto ourselves, a task that caused much laughter and required an enormous amount of energy {did I mention he was only five pounds - whew!}. 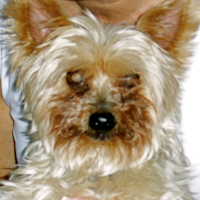 Toto was a prince and didn't like to venture out into 'the elements'. We bought several coats for him in an attempt to keep him comfortable for a winter walk. One snowy day Monique took Toto out for a walk and she came back in the front door of the house screaming. Toto would not walk in the snow because it was too cold, he laid down on his side and wouldn't get up. Monique was about 11 years old at the time, she was hysterical because she thought the dog's legs were broken. We tried putting dog booties on him for walks in the snow, but he was so tiny that even the smallest pair wouldn't stay on.
We have had many crazy moments with Sir Toto, he truly was a five pound dog with a fifty pound attitude. He loved to cuddle with all of us and we loved to cuddle him. When you have a Yorkie as a family member you always have a nap buddy.
We were blessed to have such a great little friend.
Our hearts broke as we said goodbye and whispered to him 'you are the best'.
He really was our best friend.
Posted by Katherine at 10:53 PM