My son and I left New York City the night before Pope Francis' arrival. We felt the tug and pull of being happy we flew out before the traffic became even more chaotic, and the desire to stay and experience the Pope's visit.
And like anyone who has a guest coming to visit, New York was no different in preparing for the arrival of the Holy Father - they worked diligently to ensure that everything was in place.
We visited St. Patrick's Cathedral a couple of days before the Pope's arrival to find the crews working around the clock putting finished touches on the restoration. 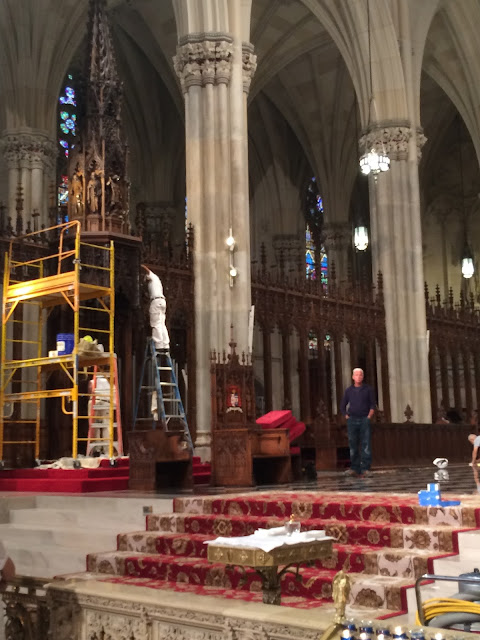 Painting, polishing, drilling, and testing the miles of media feed - it was a beehive of activity as we quietly walked through the cathedral. The beauty of St. Patrick's Cathedral is gleaming from the $175 M renovation. My son Dallas and I took our time exploring and couldn't help but imagine that in a few days the Pope would be standing at the altar. 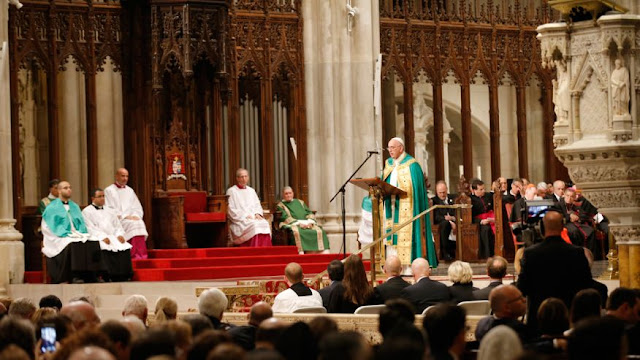 It was at Our Lady of Queen's school in Harlem that the Pope seemed the most glowing and excited. The Pope was beaming when he walked along the cheering crowd of children and generously stopped for selfie's with the students. 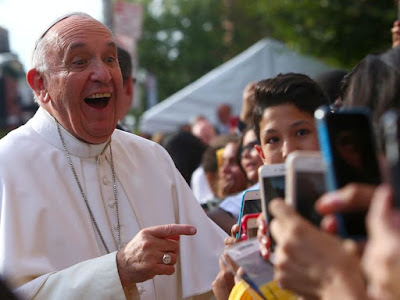 As the Pope entered the classroom the students broke out in song with a Make Me a Channel of Your Peace (the prayer of Saint Francis) and then skipped right into prayer reciting the Hail Mary with the Pope. Two young students guided the Pope to a interactive video screen to share a project the class had been working on. It was a new lesson for Pope Francis as the students guided him through the process of operating a touch screen. A young girl literally took the Pope's hand to help guide him through the exercise; you couldn't help but smile at the innocence and excitement of the children.

Speeches were detoured as Pope Francis spoke from his heart, eyes glowing back at the exited faces of the children and extended his time at the school. If he could stay and spend the rest of his time at the school, he would have. At Central Park there were 80,000 people waiting to capture a glimpse of the Pope before he leaves for mass at Madison Square Gardens.

Being in the city while New York prepared for the visit (and the UN at the same time) -  I have to say they deserve enormous applause. New York took it all in stride - preparing and welcoming the Pope.


As the journey continues with prayer and blessings for everyone,
Pope Francis asks that we pray for him.

Posted by Katherine at 5:39 PM