The number is well known.  It is the identification number of prisoner Jean Valjean, a man who has been in the galleys for 19 years. Five of those years imprisoned were for stealing a loaf of bread for his sister's starving family and 14 years served for various escape attempts.
For fans of the musical Les Miserables, just hearing the number spoken makes you want to break out into song. Don't think for one moment that fans are heartless, but this is a story that grabs you and won't let go. The music has a way of imprisoning the audience.

I gave Richard Les Miserables tickets for his birthday in May. The play opened a few weeks ago at the Princess of Wales Theatre in Toronto and we went to see it on Friday evening {funny how those birthday tickets work - I might owe him another gift}.
Musical producer Cameron Mackintosh attempted to bring the production to Toronto two years ago but 'had difficulties filling certain roles', so he waited. The powerful cast is proof that the wait was worth it.
Ramin Karimloo, who hails from Ontario is known for the 'best' portrayal of Phantom, plays Jean Valjean. Mr. Karimloo reaches out well beyond the edge of the stage and grabs your heart with his powerful vocal range. I'm certain that every audience member had their heart sitting up in their throat when he sang 'Bring Him Home'.

Earl Carpenter, who plays Javert has a powerful voice and the scene with him standing at the bridge makes you want to reach out to grab him.

Melissa O'Neil manages to steal hearts with her haunting rendition of On My Own. The exotic beauty brings just the right amount of spirit that is needed to portray Eponine.
Lisa Horner and Cliff Saunders who portray the Thenardier's, keep the story light with their antics. Saunders in particular flits and dances around the stage with what can only be described as leprechaun legs. The entire cast is perfectly suited in their roles and the performances were flawless.
The orchestra under the direction of Conductor James Dodgson fills the theatre with the mood of the story and embraces the audience through the rise and falls.


The not to be missed musical runs at the Princess of Wales Theatre in Toronto until December 22nd. Tickets HERE.

For those who can't get enough of Ramin Karimloo's voice, his newly released CD titled Human Heart is available on the Sony Masterworks label. It includes Bring Him Home, I Dreamed a Dream as well as four songs Karimloo co-wrote. 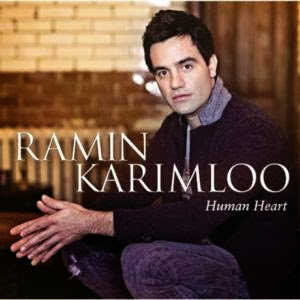 Posted by Katherine at 1:52 AM