I'm not sure when the slogan 'MAN CAVE' began, but I will admit that every time I hear a reference to it I cringe. It makes a statement about a guy space that sounds really barbaric. Don't get me wrong, I think it is a great idea that the boys have a place to retreat that is relaxed, away from the worry of spilling food and definitely as sound proof as you can make it.
The space doesn't need to be void of great masculine style to be able to achieve those requirements. And although the boys will be boys...... they are mature and sophisticated enough to want to show off some great style all of their own. 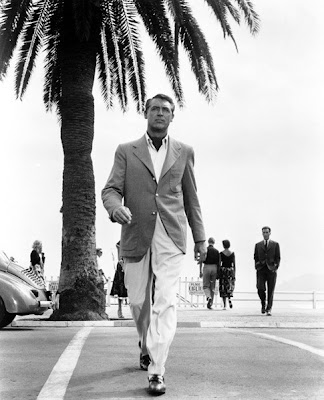 Maybe a little old Hollywood charm and sophistication could set the tone.
Both of our Sons have their own space. My Son Dallas, is 30 and has an apartment in the downtown core. The building is retro style and they have retained much of the charm of the lobby from the original build. That is what sold him on the space when he was hunting for his own place. My Son is the neat freak {sorry sweetie, you inherited that from me}. He asked for my help {ok, I also pushed my way in} when he was decorating the space.
I urged Dallas to chose warm masculine colours with pops of vintage fresh. His washroom is painted charcoal gray and is accented with white and burnt orange towels. He scored my antique radio for the reading nook area and it is teamed up with a leather chair and ottoman, reading lamp and a vintage silver airplane sitting neatly on the radio.
We hunted down an art deco style hutch to hold cut crystal cognac glasses; part of the vignette on top of the hutch there sits a great black and white image of one of the BOND girls. It's a little RatPack vintage look.
Richard's Son is 26 and lives in his own condo in the burbs. He is not the neat freak, but he has a unique flair to his decor choice. When Justin was setting up his condo he had very specific idea's of how he wanted to decorate the space. He started by re-staining the floors dark, knocking down the wall between the kitchen and dinning area, and installing brick on a wrap around wall in the main living area. He was 25 at the time and I was amazed at how much he took on without hesitation.
Justin's style is Asian influenced and he has been lucky to tap into his Dad's collection of original items. A large Chinese hutch adorns his dinning area and has been transformed into bar cabinet. A very large Chinese gong hangs on the main wall of the common area and has been carefully lit to enhance the patina and reflect back off of the brick wall behind it.
We found great antique doors on original barn door rails and they were installed at the washroom in the master bedroom. The master bedroom is somewhat of a James Bond den with a full remote controlled screen retracting down from the ceiling to enjoy movie watching from the bed. 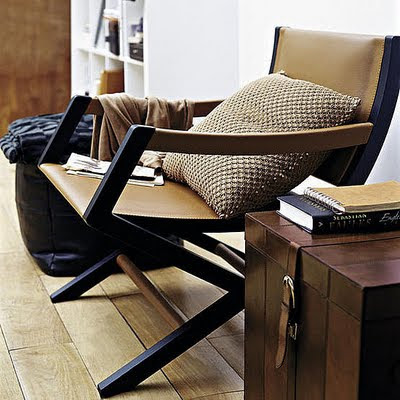 These young men of ours who want to have fun and relax, know that they can do that and still have a space that reflects their masculine style.
I like the idea of chairs, sofa's or cushions upholstered in men's tailoring fabrics. Grey pinstripe, nubby tweeds, classic herringbone; all of it works to create a warm and relaxing space. Like both of our Sons did in their spaces, consistently adding a pop of colour to bring out the design adds the drama.
And if you must...... the humidor provides an essence of 'the guys space'. It doesn't need to be this complete of a humidor experience, and truly wouldn't this cabinet be great to display many things.
via squob
The Renovated Rental

Interior Designer Grant Gibson struck a deal with the landlord of his apartment in San Francisco prior to moving in to the space back in 2007. The landlord gave Mr. Gibson  two months rent in lieu of the designers talents and workmanship renovating the space. Here are a couple of the images {and the link to the article} about this great masculine space.

Masculine Personal Space......... doesn't that sound so much more sophisticated than man cave?
Posted by Katherine at 8:31 AM