Next week, August 16th to be exact, marks 34 years since the death of Elvis Presley. In his 42 years Elvis left a sizable mark on the Rock'n-Roll scene, impacted the musical movie business and still remains in the hearts of millions of fans.

Today marks the start of 'Elvis Week'. Time to break out your old vinyl and swivel yours hips to the tunes that are forever timeless.

Often you hear people recite where they were when they heard the news of a tragic passing; President John Kennedy, Martin Luther King, John Lennon, and of course Elvis. In August of 1977, my boyfriend and I had already planned a trip into the south of Florida. We were told the drive in to Memphis wasn't too long (ha), and so we ventured over to Graceland on our way to Florida.

Elvis had only passed away three or four weeks when we visited Memphis, and was at the time in a crypt at the Forest Hill Cemetery where his Mother was buried. When we visited the cemetery floral tributes were still being delivered, and one arrived when we were there. It was a four foot high white floral design shaped like a guitar; people began taking flowers off of the arrangement to keep as souvenirs. We were very upset as we watched fans take tributes meant for Elvis and we left the cemetery.
It was shortly after that time (within the month) that someone attempted to steal the body. Both the body of Elvis and his Mother were then moved to the Meditation Garden on the grounds at Graceland.


We visited Graceland which was still occupied at the time by Elvis' Father Vernon. One of his Uncle's was on staff as security and chatted with people at the Gates of Graceland. We wandered and like most of the fans took pictures of the house from beyond the gates. People had managed to remove some of the metal music notes from the custom gates and the sense of sadness around the pillaging was enormous.

At the time there was nothing keeping people from walking up the side of the property along the brick security wall.... which of course we did. At all of 18 I didn't see anything wrong with peaking over the wall; that was until the security came out and said 'we got you on camera little girl', as he pointed to the camera up in the tree.

My Mother has told me many times, that when Elvis first started in the business the television camera would not take pictures of him full length. Those swiveling hips were just too much for the times. For many of us, Elvis' famous hip-swivel dance routine was as exciting as his voice.


Bob Dylan described hearing Elvis as 'like busting out of jail'.

In 1964 Elvis proved that having a Blue Christmas was just fine. The single recording topped the Billboard charts at a time when they did not rank holiday recordings. In 2008 Sony released a duet dubbed with Martina McBride singing the holiday hit along with Elvis. Ms. McBride was styled for the video to reflect the era of the original recording; but you cannot help and notice how much she resembles the softer look that Priscilla wore in earlier years. 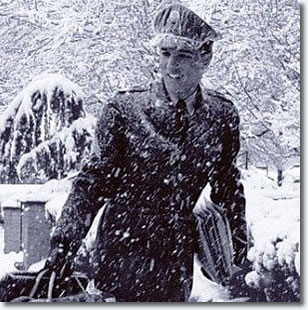 I watched all of the Elvis movies, he was the guy who always got the girl and busted out in song all the time. Who could resist that devilish smile and those sparkling eyes.
Elvis' music plays on with generations who never had the opportunity to see him perform with remix tunes like 'A little less Conversation', which is a huge club scene favourite.

The impersonators could never match Elvis' sultry voice or sexual appeal, but yet the fascination continues and they try. Television director Steve Binder was quoted as saying "whether you are male or female, you cannot help but look at him. He is that good looking. If he walked into the room you would know that someone special was in your presence". 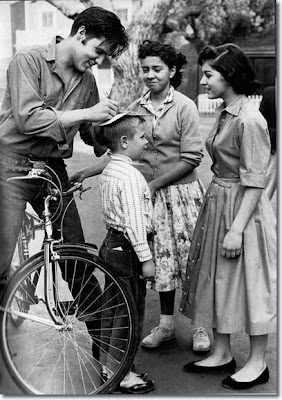 When I married in 1978 (and since divorced), our first dance was to Elvis' song 'I Can't Help Falling in Love' [written by Otis Blackwell & Elvis Presley]. This all time romantic favourite has been played at many weddings since it first hit the air waves back in 1962. Generations for years to come will cuddle to that huge hit and dance to the remixes that shape a new generation.

Elvis - the KING of Rock'n Roll. He is not iconic, he is memorable. May wonderful memories of his talent continue to live on.

Posted by Katherine at 2:08 AM