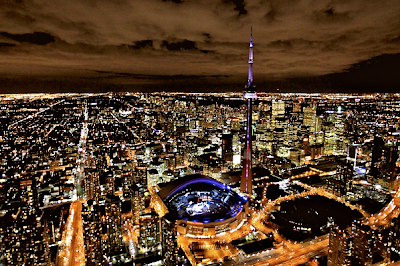 Under the twinkle of the stars and a Gibbous moon, U2 rocked Toronto last night in an open air concert at the Rogers Centre. The dome was wide open giving an added thrill to an already exciting night when Bono and the lads took to the stage.
The concert was postponed in early 2010 after Bono suffered an injury while touring.  We had been holding on tightly to tickets since then and it was worth the wait.
U2 proved again why they are one of the most sought after bands in the world. The band led the crowd of 60,000 fans through the line-up of favourite tunes over the course of the night. Our seats were a bit higher in the stands than we had originally wanted, but in the end proved to be a bonus as we managed to capture brief streams of a breeze over the wall of the dome. With tempatures of 34 degrees and a humidity of 40 throughout the day, the pit in front of the stage would have been like a sauna.
Toronto didn't disappoint in playing along with the band as the CN Tower hosted a theatrical light show that bounced with the tunes as they rose up from the open roof venue. We were sitting on the west wall of the Rogers Centre in full view of the stage, the open roof of the dome luminated in purple, and the dancing light show on the CN Tower. It provided the perfect view of the entire venue and our city.
The 360 stage appropriately named 'the claw', sits high above the double circular stage which features moving bridges connecting to each ring. It is not just by chance that the circles and bridges form an inverted peace symbol when in the stationary position. The stage which is reportedly moved in 40 long haul trucks and takes over 24 hours solid to construct, will make its final debut in Moncton at the end of July. And just in case you are interested, the stage is for sale.
As if the range of Bono's voice and the bands flawless performance were not enough to generate excitement, the showmanship of the onstage visuals helped to create constant stimulation. Floating above the band was a honeycomb of LED panels that together forges a solid screen of live activity and ever changing messages. As the show progressed the honeycomb expanded open and the graphics moved flawlessly along with the screens.
See the world in green and blue!
This band see's the world literally and without rose coloured glasses. They make it their mission to use the stage to highlight the needs of the less privledged, and last night was no exception.The message is clear, it would all be in vein if they didn't lend their resources or power of influence to help to make the world a better place.
U2's 360 Tour has grossed a reported $700 million and entertained 7 million fans world wide. The tunes we love to sing along with, the music is powerful, the boys......... are still boyish.
The philanthropy messages and assistance to programs world wide
..........is pricless.
﻿
﻿

Email ThisBlogThis!Share to TwitterShare to FacebookShare to Pinterest
Labels: Bono, Toronto, U2