I've been stalking following a house renovation in our neighbourhood for a couple of years. Yes, that's right - a couple of years. The house originally went up for sale in approximately June 2011 - after the sale the process of permits, approval of the historical society and rebuilding began.  The original post with details on the homes history is HERE.

But let's cut to the chase and look at the house as it is appears today {still not complete}. This is Point O'View located at the foot of Trafalgar Road at the lakefront in Oakville.

This house is literally steps to the shore of Lake Ontario. In addition to the incredible views of the lake {think the beauty in the summer, the storms over the water and the snow-scape in the winter}, the house benefits from the micro climate conditions right at the lake.


The house was listed for $2.8 M, and after the two and a half years of process, permits, plus design and build costs the investments far exceed that number now. When the home sold it was 4,000 square feet and I was told by someone on the project that it is now 7,000+ square feet. The new homeowners were slated to move-in in June, however the process seemed to be delayed and although much of the house seemed complete the interior walls were not insulated and dry-walled. When I wandered by a few weeks ago you could see that crews were finally given the go-ahead to close in the walls.

Work on the exterior proceeded and the property has already started to take on a settled appearance. Anyone who has gone through a renovation can admit that beautifying the exterior is usually the last thing to happen, but this General Contractor took advantage of the wait time developing the beauty outside too.


Things have got to get a bit ugly and scary before they get pretty. The underpinning of this house had me wondering if the old home would survive the process. 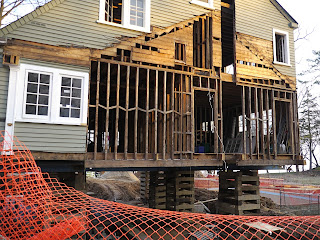 Many of the houses in our community must pass the approval process of the Historical Society. Albeit that it is important to preserve the heritage of the buildings at times it affects the buying/selling process. This house was kept within the general frame of the original building with a full excavation and underpinning. Some of the original windows remained on the house while others were replaced.
The balance is that the house has kept it's original character and has become more energy efficient. I also think the house has gained a tremendous amount of charm that will surely increase as layers of garden are added over the next few years.


I'm looking forward to seeing the finishing touches of this charming historical property and hoping that one of the Canadian shelter publications gets the opportunity to photograph it.

Posted by Katherine at 3:36 PM