We went to see the movie The Butler last night and give it two 'thumbs up'.

The movie is a semi-true story of the life of Eugene Allan who served as a butler at the White House for 34 years.


From the cotton field he grew up in and escaped from, to the Little Rock school crisis, the 1963 march on Washington, civil rights bills, cities burning, assassinations of Martin Luther King and President Kennedy; Eugene Allen witnessed it all and lived a fascinating life over his 91 years. It is the skeleton of his life story that serves to bring the historical facts of the civil rights movement boldly to the screen and tells the tale through the quiet dignity of Cecil Gaines {played by Forest Whitaker}. The story spans over the Presidential terms of eight leaders from Truman to Reagan where Cecil Gaines is hired to butler at the ultimate house - The White House. His character dutifully remains a mute servant while the civil rights movement rages outside of the Oval Office, Cecil struggles as the patriarch of his own family.

During his tenure Cecil is given instructions on being a White House butler; 'You see nothing, you hear nothing, you only serve'. But Cecil is privy to many discussions while he serves the President and various high level administration.Whitaker delivers a dignified portrayal as the butler and it's easy to see why there is already chatter of an Oscar Nomination.

Oprah Winfrey takes on a juicy role as Cecil's wife Gloria Gaines, and obviously enjoys every moment of the portrayal. Gloria is the ferocious mother lion to her two sons - one son who patriotically served in Vietnam and the other son who politically takes on the civil rights fight. In real life the Allen's had only one son who did serve in Vietnam and survived. Gloria struggles with the devotion her husband has to the White House, his absence from home, and the choices her sons make.  Gloria drifts through moments of drunken reaction to realty and her fierce loyalty to family that is never wavering. Word has it that there is a glorious gold statue award nomination in the wings for Winfrey as well.

Lee Daniels once again tells it like it is and the 'N word' is frequently used throughout the dialogue as it would have been during these times. Although casting of Forest Whitaker, Oprah Winfrey, Aml Ameen, David Oyelowo, Lenny Kravitz, Cuba Gooding Jr, and Terrence Howard were brilliant choices,  there are moments that movie goers are left whispering about other portrayals.

Clarence William III portrays Maynard who brings the pivotal moment of change to Cecil's life by offering him the opportunity to butler. We couldn't help but lean over to one another in the theatre and say 'hey, it's Link' {a'la Mod Squad fame}. Don't get me wrong CW-the-third plays the part perfectly, but we paused away from the character for a brief moment to reflect back.


Robin Williams as President Eisenhower left me feeling like the film had suddenly switched to a SNL skit. Williams doesn't push the way he normally does, but you can't help but feel he will break out with a witty one-liner at any moment. John Cusack as Nixon.......... was a stretch. 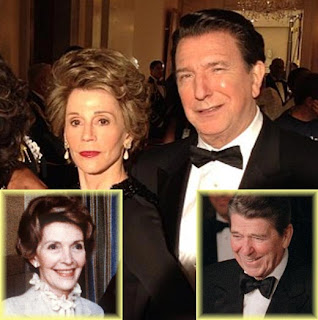 Liev Schreiber as Lyndon Johnson has the opportunity to offer the audience some of the best laughs. One of the more memorable scene's as 'out-there' Johnson when  the butler and staff assist him while he performs his 'duties'.


Possibly one of the sure fire Oscar nominations will be for the make-up artist who transforms Forest Whitaker and Oprah Winfrey from young adults to senior citizens. Under the scrutiny of an enormous theatre screen close-up the transformations are shockingly realistic.


It is the voice-over of Whitaker in his role as Cecil Gaines towards the end of the film that strikes a real cord.
Listen carefully for the message that should never be forgotten.

Posted by Katherine at 4:28 PM