As the Inaugural Balls were already underway and the choice was reportedly down to two designers who had not been announced. Designers waited patiently to see if their creation for the First Lady would make it on to the stage as Mrs. Obama danced with The President. 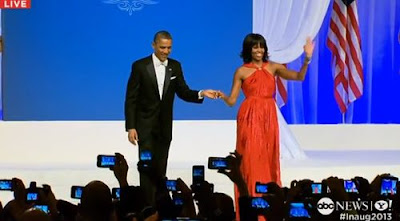 So what is the mystery and excitement all about? For designers it is like winning an Oscar and as Jason Wu discovered in 2009, it changes the profile of their style and business forever.

Dancing to 'Let's Stay Together' sung by Jennifer Hudson.  The Obama's danced and cuddled on stage chatting as if there was no other person in the room but just the two of them........ well, that was until a couple in military uniform appeared on stage. Mr. and Mrs. Obama switched it up and danced with the military partners for the remainder of the song.

Tonight at the Inauguration ........... Showing off her well toned arms and back Mrs. Obama's red velvet and chiffon overlay Grecian style gown with a criss-cross neckline was created by Jason Wu.  Mrs. O wore Jimmy Choo shoes and a custom designed diamond ring by Kimberley McDonald.

And The President ............looked handsome in a black tuxedo and white tuxedo tie.

Posted by Katherine at 9:17 PM