Before I share the latest images of fashions that the Duchess of Cambridge wore to the Olympic events, I want to start with this picture of the Queen at the Olympic Park. As the lens looks over the Queen's shoulder, she is shown experiencing a more pensive moment as she absorbs the massive undertaking of the Olympic events and reflects back on the history.

At a reception prior to the opening ceremonies the Queen said:
"This is the third London Olympiad. My great-Grandfather opened the 1908 games in White City; my Father opened the 1948 games in Wembley Stadium, and later this evening I will take pleasure in opening the 2012 Olympic Games at Stratford, in the east of London".


The Queen took the world on by storm in her mock portrayal as a Bond Girl for the opening ceremony and has shown the world that she does have spunk. She thought her cameo appearance was 'a bit of a laugh', and we had to agree. 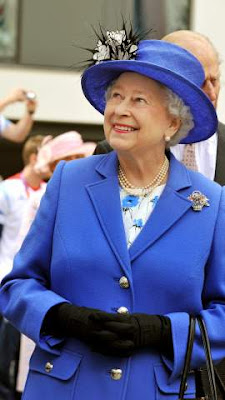 The Royal family has been involved in the opening events and was especially proud today when the Queen's Granddaughter, Zara Phillips made her equestrian debut on her horse High Kingdom. It's all a good reason to smile.


Now on to some of the Olympic Styles sported by Catherine........

Prince Harry, and the Duke and Duchess of Cambridge welcomed the Olympic flame onto the grounds at Buckingham Palace. The Royal trio wore Team Great Britain shirts, but it was once again Kate who put the best fashion foot forward. 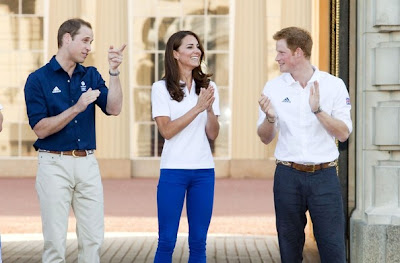 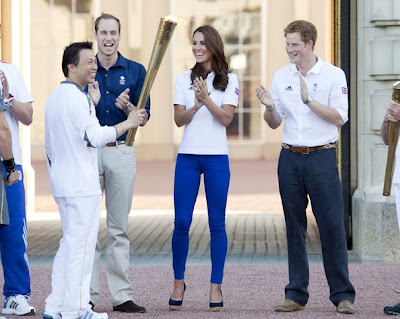 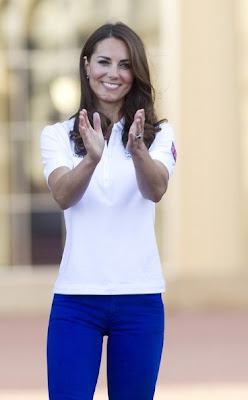 During a visit to St Beacons College for the Coach Core program, which is a partnership program with The Royal Foundation of the Duke and Duchess of Cambridge and Prince Harry; Prince William explained the athletic expertise of the trio:


" Watching me on the football field is never a pretty site.... the expression giraffe on ice springs to mind. However it is marginally less embarrassing than seeing my Brother cheat his way to becoming the fastest man on the planet"
{in reference to Prince Harry's false start sprint against Olympia Usain Bolt during a visit to Jamaica}

And with pride William spoke about his wife's sporting talent:

"Catherine on the other hand, with a tennis racket or hockey stick, is something to behold and be aware of." 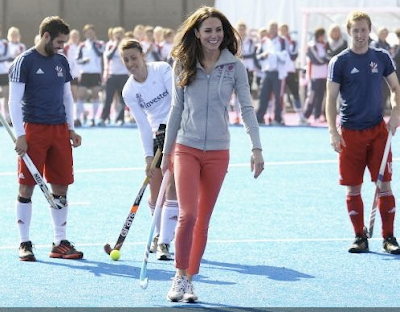 Kate wore these red skinny jeans and grey hoodie to play with the Great Britain Women's Olympic Hockey team during media scrim last March. She paired the jeans with heels, a classic navy blazer and the official GB Olympic scarf proving once again that she knows how to extend her wardrobe.

The scarf at only $15 was already a sure fire seller, but the Kate style-train would make grabbing the Olympic scarf enormously popular. 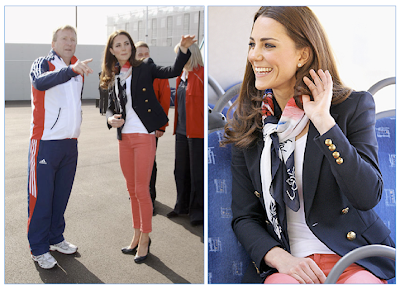 When the Royal trio visited St Beacons College Kate wore a Hobbs Check Wessix dress in soft grey and cream which proved comfortable enough to play ping-pong in. She kicked off her Pied a Terre Imperia wedges to participate with the karate team. 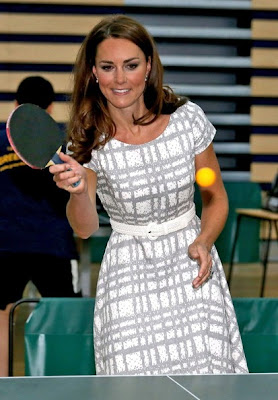 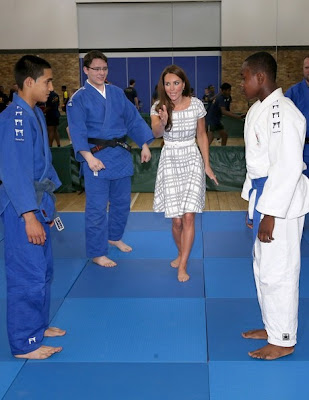 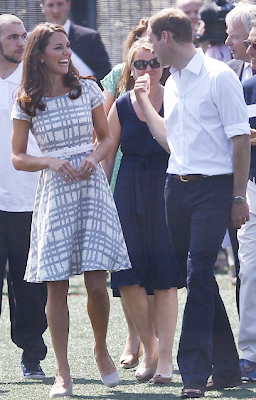 At the reception for the opening ceremonies the Duchess wore an ice blue coat ensemble by Christopher Kane. Simple lines fitted well to her slender figure in an elegant shade that brought a defined sophistication. Kate looked stunning - again!

I couldn't locate a full body image to show the hem and her shoes; but I love the lines of the jacket, the flat pocket placket and simple belt.

Kate's blue topaz and diamond earrings by KiKi McDonough sparkle with a nod to the Olympic ring.


Wishing all the extraordinary athletes the best of show in their categories.
Posted by Katherine at 10:24 PM