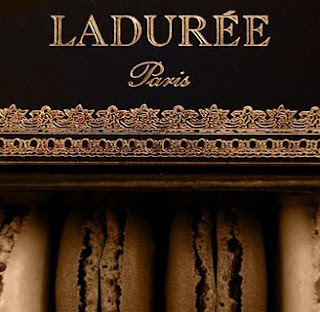 It was back in 1862 that a small bakery opened at 16 rue Royale in Paris, it was not to be just any ordinary shop, this was the beginning of the world famous Laduree pastry shop. I'm certain that Louis Ernest Laduree could not have imagined 150 years ago that the humble beginnings of his bakery shop would develop into the quintessential Paris pastry boutique of today. The Parisian luxury brand stores are eagerly welcomed today in major cities world wide.


The celebration of Laduree's 150th Anniversary has already begun with new pastry products, designer inspired packaging and a beauty line to mark the year long event. A special macaron flavour with it's own designer box will be featured each month of the anniversary year. The new recipes start with a marshmallow filling, rather than the usual cream filled meringue based cookie.


The pink-cherry-blossom themed collection is the collaborative creative talent of French chef Vincent Lemains and Japanese designer Tsumori Chisato. The pink cherry-blossom flavoured macaron is complimented with packaging and a candle in the same theme. The anniversary cherry-blossom theme is available starting March 1.

It wouldn't be an Anniversary or a carefully marketed product without gifts to remember the celebration. In addition the the newly created macarons, specialty cakes, vintage style packaging, there is a selection of candles, books and an anniversary keychain.

The experience of the romantic luxury pastry shops is a divine experience in itself. Famed lithographer and French painter Jules Cheret brought his vision to the first Laduree pastry shop in 1871 when he painted the ceiling of the shop with cherubs dressed as pastry chefs. The Laduree symbol was born.
The elegance designed by Cheret was appreciated by ladies who could now 'take tea' outside of their homes at the tea rooms set up at Laduree. The typical cafe were domains only inhabited by men before the public tea rooms evolved. Today we continue to enjoy the exclusive romantic styling that was the vision of Mr. Cheret. 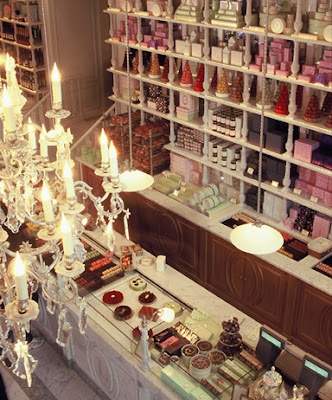 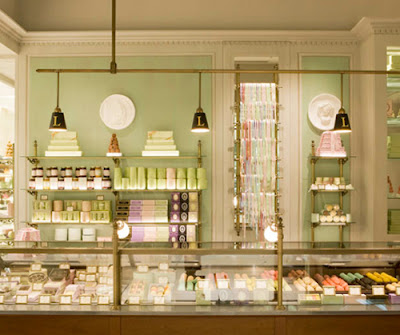 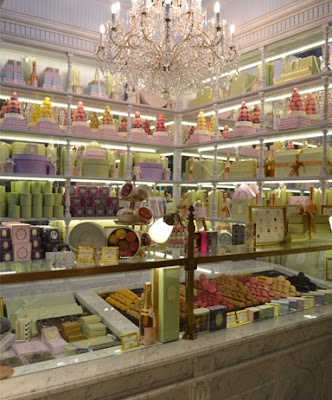 Celebrating the Macaron for a worthy cause:

March 20th is the Seventh Annual edition of Jour du Macaron {Macaron Day}, a celebration of the double-sided macaron....... as if we needed a reason to enjoy the delicate sweetness.
Visitors to Pierre Herme, Sadaharu Aoki, Laurent Duchene, Jean-Paul Hevin, Arnaud Larher, Christophe Roussel and Dallayau shops in Paris will be offered free macarons on March 20th. While you are enjoying the delicious sweet treat the stores will graciously accept donations for Autistes sans frontieres {an organization that assists children with autism}.
And while I can't think of a better reason to visit Paris, Macaron Day is celebrated globally. A quick internet search will provide details in a city near you..... while I board a plane to Paris.