It may not seem like much to anyone looking at the pictures here, but this - my friends, is progress. When you are renovating a house and it gets stripped right down to the bare bones, it feels like it will never get put back together. The moment I drove up to Cardinal House and saw brand new windows winking back at me, I knew we were on the way home.

So maybe this isn't the prettiest blog/decor image, but these new windows have managed to put a sizable smile on my face. The existing Angel stone has been saved and will be re-worked around the new windows. Eventually the stone and brick on the entire house will be tinted grey {more on that process later}.


The small slider windows have been replaced with new long windows with horizontal mullions. The exterior colour is cashmere and the interior is white.


We engaged Garth Dinan of Accurate Aluminum Works to take on the task of bringing an updated traditional look to our 50 year old bungalow. Truthfully, I could have kissed him when I drove up and saw the windows. Garth and his team will be installing the eaves troughs, fascia and soffits when the masonry is worked.
The stone and brick will be Perma-tinted grey, the eaves in soft satin black with fascia and downspouts in cashmere.


The original front living room windows of the house were wood framed and leaky. They were set off center in the living room and only inches from the front entrance. The new grouping of windows has been shifted to the left and the entrance has been reworked.


The long windows are very different than what has been typically put in this style of home, so I felt it was a risk {oh, and isn't Richard happy to hear that now}. The 'look' is exactly what we had hoped for. The glass doors leading to the garden/lanai will be installed today, the front entrance door and side panel windows will be installed at the end of construction {so they don't get damaged}.


The back wall of the house was knocked down a week ago when the framing was complete and the crew was getting ready for the new windows and doors. The master bedroom now has long windows and a glass door {being installed now} that takes advantage of the beauty of the property.
The newly poured concrete area outside of the bedroom is the lanai - it will have a wood burning fireplace when complete. We are already imagining waking up to the view of the tree's and stepping out onto the covered lanai area with a cup of java. 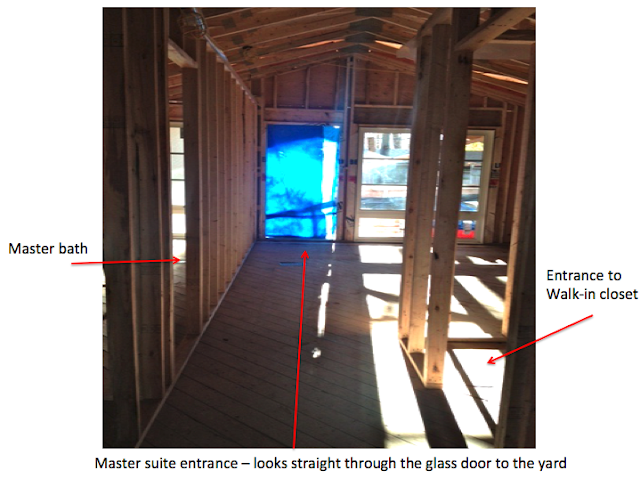 When I put together the new design for Cardinal House, the focus was on capturing the vista of the house. When the back brick wall of the house finally came down, it gave us a better view of the size and flow of the rooms.
Richard took me to the house one night to surprise me with the progress of the day. With flashlight in hand and work crew lights turned up, we stood in the new open space. Everything we had hoped for with the flow of the house was finally visible. When you step into Cardinal House the vista will take your eye through the house to the windows at the back that over-look the yard. The rooms will be defined but flow into one another, all the while taking advantage of the great view.


The family room opens to a special room created just for Richard's piano. Here he will be able to sit and be inspired by the view while he plays his Antique Chickering. I know that Kya will keep him company on the piano bench, and they will play a tune for the Cardinal, who will no doubt be sitting among the trees.