The paparazzi is not as secretive as the statue of a photographer above. 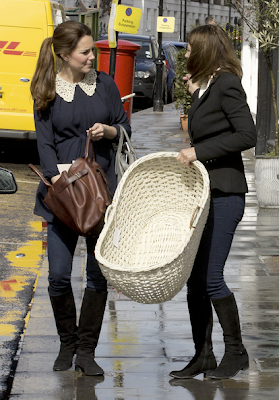 It is reported that the Duchess of Cambridge has moved to her parents home in Bucklebury, Berkshire for the weekend to get relief from the overwhelming temperatures at her Nottingham Cottage {which does not have the modern amenity of air conditioning}. Having delivered my first child in the heat of July I can sympathize with all mom's-in-waiting right now.
When you are at full bloom waiting for baby to make a decision on when he/she will to make their arrival, the constant question-announcement to you is 'No baby yet?!'. Any woman at this point in her pregnancy will agree it makes you want to go into hiding ...... anywhere. For Kate the volume is magnified by the world watching.

The organized camping of photographers at St. Mary's Hospital in London began at the beginning of July in anticipation of the royal baby and hopefully the efforts will keep the craziness of paparazzi at bay.

Four parking bays have been roped off directly across from the Lindo Wing at St. Mary's to accommodate select accredited photographers who are permitted a 'spot'. The area is divided into taped out squares identifying the journalist group who is allowed to occupy the space, ladders of various heights are positioned to create a bleacher aspect and equal opportunity.

No matter who it is facing a sea of lenses and light bulbs, and no matter how 'set-up' for control the situation - it is daunting. Hundreds of people shouting your name over and over........ as if you didn't know they were there. Working the red carpet at film festival in Toronto taught me just how quickly a crowd can grow wild and out of control.

So what does a motley crew like this do in their little taped down square for the days leading up to the 'moment' shot? 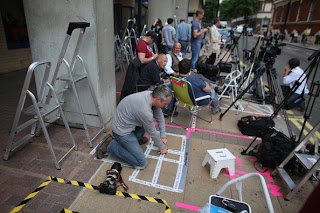 Passing the idle hours has included taking pictures of each other taping down the 'spot', playing pranks by selling off someone's ladder, and placing their bets. Like many others in London the guessing game has it's numbers attached to it. I'm pretty sure that the safest bet is that the Royal Baby will not be named Pocohontas {500/1 in favour}.

The royal baby will be given the title HRH Prince or HRH Princess - and will be referred to this way in formal announcements. William and Catherine have three choices for a surname for their children, Mountbatten-Windsor {the Queen and Prince Phillips surname}, Wales {which William goes by}, or Cambridge {the given title to The Duke and Duchess of Cambridge}. 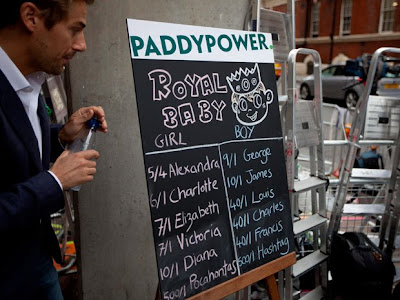 While waiting for the new Prince or Princess to make an appearance snuggled in the arms of the Duke and Duchess, there is plenty of time to read a good book. Shhh! Don't Wake the Royal Baby! by Martha Mumford is a sentiment that I'm sure the new parents would willing to convey to the throngs of people outside the hospital.

Local shops have experienced what is sure to be just the start of the royal baby gift and souvenir shopping frenzy.
Getting in on the act of royal baby products is soon-to-be-first-time-Grandfather Prince Charles. Handmade leather baby shoes are being sold at the Highgrove shop with proceeds being donated to Prince Charles Charitable Foundation.


Not to be outdone by visiting Auntie or Uncle in the gift giving department - Beauty and the Bib has created a special line for the royal occasion.


In addition to the 'cute' get in on the act type of gifts, there is an enormous share of so-tacky-I-can't-sell-it-at-a-garage-sale type of merchandise......... like this....

Apparently the sick bags have sold for those who experience too much celebration of various royal events and for those who cannot stomach anymore {at lydialeith.com}. Kate has demonstrated both her sense of humour and solid footing during stressful times, but the sick bag just may come in handy as she deals with the craziness around the birth of her child.

I thought I'd share an image of Kate as a young child, a picture I hadn't seen before. Here Kate is with her sister Pippa and father Michael {in Amman, Jordan where they lived for three years}, both girls have blond hair. Part of the betting game is the colour of hair the royal baby will have, this image would make me sway my bet.
One thing is for sure, both William and Kate have vivacious smiles and their child will likely have the wide dimple grin they both do.


Sending wishes for a safe and healthy delivery.
Posted by Katherine at 3:06 PM