Chris Hadfield's glimpse of the world

Canadian Astronaut Chris Hadfield will end his space-flight tonight when he returns to earth from Expedition 35.
After five months of floating weightlessly, Hadfield will bring the space-craft back for a scheduled landing on the flat steppes of Kazakhstan at 10:31 pm (Eastern Time). The experience of a Soyuz landing has been described by astronauts as similar to surviving a train wreck, it's a dramatic jolt back to earth and will take days to adjust to gravity again. 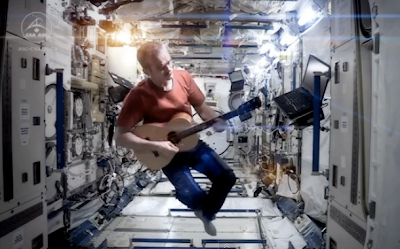 So what does a guy do when the experiments and testing in space are done for the day? When you can't lie in bed or sit in a chair ......... you just kinda float around... what do you do?  For Chris, it meant working on the first original music album to be recorded in space. A music video released just yesterday has hit almost 2 million views on youtube already. Eighty-one videos of Chris' experiences on this space journey and over 750,000 twitter followers has brought an insightful education about the space program to followers world-wide.

The revised version of David Bowie's 'Space Oddity' is performed by Hadfield as he drifts throughout the cabin of ISS and brings to the screen the experiences of life in space. You realize while watching the Canadian Astronaut as he sings and floats throughout the cabin, that the lyrics are as much in his blood as the entire space program. Images of Commander Hadfield at the porthole window with the solar system in his constant view is inspirational.

The video was produced by Evan Hadfield {his Son}, Emm Gryner, Joe Cocoran, and Andrew Tidby.

Chris Hadfield was born in Sarnia, Ontario and attended West Oak Secondary School in Oakville {where I live}.  Sarnia is honoured by the mission man - the airport and a public school where Chris once attended, have both been renamed after him. Chris' parents reside here in the southern Ontario area.

After a 20 hour flight from a Kazakhstani airbase to NASA in Houston, Commander Hadfield will be greeted by his wife at an undisclosed time on Tuesday. He will need a few days to adjust to gravity and pending physicians approval he will make a public appearance Thursday before flying back to Canada.

I encourage all Canadians, especially local businesses in Southern Ontario, to salute the astronaut and acknowledge his expedition.

Posted by Katherine at 3:38 PM