American Author F. Scott Fitzgerald wrote what has been acclaimed as the 'great American novel' when he penned 'The Great Gatsby'. The novel written in 1925 lent only a few years of experience about the 'roaring twenties' post World War I. The novel was adapted to screen originally in 1926, albeit that the film copies have been lost. Paramount pictures released the story in 1974 with Francis Ford Coppola's adaptation featuring Mia Farrow and Robert Redford. Coppola's version of Gatsby remains one of the more memorable of the five film renditions - that is until now.

Soon to be released {May 2013} is the fifth and latest, much anticipated version of The Great Gatsby which was filmed primarily in New South Wales, Australia. The story may be a familiar one, but this rendition promises to bring to the screen a beauty and opulence that is beyond all other Gatsby films. Sets and costumes have already captured the attention of designers and movies goers.

This is a film that I know I will watch several times just to drink in the design details. Here is a brief look at some of the deco elements from the film and how they will influence both design and fashion this year.

Designer Catherine Martin has two golden boy Oscar statues to her credit for set design on Moulin Rouge. Catherine is no stranger to producing elaborate sets and costumes with Director {and husband} Baz Luhrmann; earlier collaborations include the sets of Strictly Ballroom, Moulin Rouge, and Australia.


Ms. Martin used the now closed Saint Patrick's Seminary in Australia to help create the Disney-castle-like ambiance required to portray the luxurious home of Jay Gatsby. Ivy was added to portions of the exterior, and an elaborate fountain was constructed in the courtyard. Artists digitally added turrets to the exterior in post-production to create an even grander illusion to the mansion. In 2006 Nicole Kidman and Keith Urban married in the Cardinal Cerretti Chapel at St. Patrick's Seminary.


Inside Gatsby's mansion's center point is the ballroom, where lavish parties are held. Underneath the gold filigree ceiling hangs an ornate crystal chandelier that glistens over the marquetry floor complete with JG's monogram. The serpentine staircase grandly winds up to offer breath taking views of the generous windows and columns in the ballroom.

Looking at the image above of the Gatsby mansion ballroom it is easy to see why the movie has been a major inspiration for wedding themes this year. The marquetry floor gleams back the reflection of multiply lit candelabra's. Billowing drapes add a dreamy quality to the long windows. I love the over-flowing floral in urns sitting atop plinths. The perfect surroundings for a lavish soiree or a picnic on the floor.

The mansion wouldn't be complete without a well appointed pool. Jay Gatsby's monogram lines the bottom of the rotund cement pool. 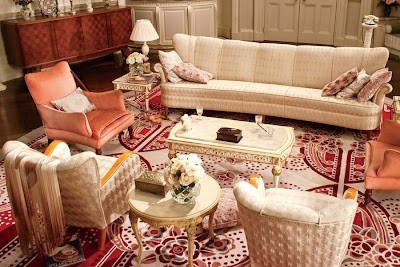 Daisy Buchanan's sitting room features soft upholstery pieces in creamy tones and apricot accent chairs. Vivid colour was used throughout this period, and yet  soothing neutral tones heavily influenced most feminine designs. This design showcases the perfect combination for a lady.
The dramatic ruby and cream patterned rug is another of Catherine Martin's designs.

Considering the opulence of the rest of the set this room seems understated. It is only one image of this particular set - but the table, chairs and table setting seem lack luster to the balance of the room. Another of the Martin's custom design rugs anchors the room.

Beyond the massive Gatsby estate is the palatial home of Daisy and Tom Buchanan and the charming cottage of Nick Carraway.

So why do we love Deco so much?
It represented luxury, glamour, exuberance, and faith in social and technological progress {according to Wiki}.

The lines are symmetrical - think chevron, sunburst motif or zig-zag.
The colours are vivid and high contrast - Gatsby inspiration may be another reason for Pantone's colour of the year - Emerald.
The materials are sexy and strong - stainless steel, Bakelite, chrome, lacquer.

When I think the Gatsby era I think of the beauty that is The Carlu. And although the style is considered Art Moderne - a late type of Art Deco, The Carlu boasts an aura of grandeur that Jay Gatsby would find appealing.


The Seventh Floor of Eaton's College Street store in Toronto was designated by Lady Eaton for high society events. French architect Jacques Carlu was commissioned by Lady Eaton to design the Seventh Floor with Gala concerts and elegant entertaining in mind. It was in 1931 that the grand hall first opened and hosted the musical talents of Billie Holiday, Frank Sinatra, Duke Ellington and Glenn Gould.

With changes to the Eaton family business, the doors of Eaton's Auditorium closed in 1970. The dance group I performed with presented on the stage probably a year or two before the auditorium closed and I remember how grand it had been.
The Seventh Floor sat vacant for thirty years and it was in 2001 that Jeffry Roick and Mark Robert brought this beauty back to life.


While preparing for a Toronto International Film Festival private event at The Carlu, Jeffry Roick {a principal partner} told me that the first time he came off the elevator on to the Seventh Floor it reminded him of the Titanic. The grand ship sat in cobwebs, dust and forgotten. But Jeffry and business partner Mark Robert could hear the music and see the beauty.

The Round Room was the perfect spot to listen to the mellow sound of Denzal Sinclaire {a Canadian jazz artist who sounds remarkably like Nat King Cole}, while Matt Dusk took the main stage in the Concert Hall bringing the sounds of Frank Sinatra back to the grand auditorium.

The restoration was pain staking, the costs enormous. Roick and Robert unearthed and had restored the original full wall mural that was painted by Carlu's wife in the Round Room. The fountain had been dismantled and covered. Today the deco inspired fountain is fully operational and remains the center point of the Round Room.
I attended a wedding several years ago at The Carlu and the Round Room was the perfect back drop to romance. With The Great Gatsby inspiration leading the wedding trends this year, The Carlu will be a favoured venue.

Designer Sarah Richardson and Tommy Smythe took on the task of designing The Clipper Room. They softened the look and feel of the room by adding multi tones of grey, replaced the hard linoleum type flooring with soft carpet, and brought in furnishings of the deco period. Lighting in the tiered ceiling creates a soft and romantic glow to the room.

And then there is this dashingly handsome man who will surely inspire me watch the movie just one more time to catch a glimpse. 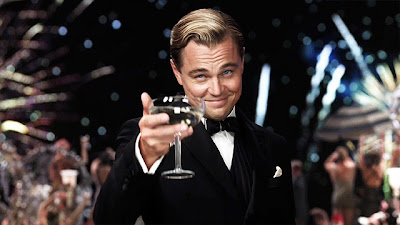 Posted by Katherine at 3:25 AM